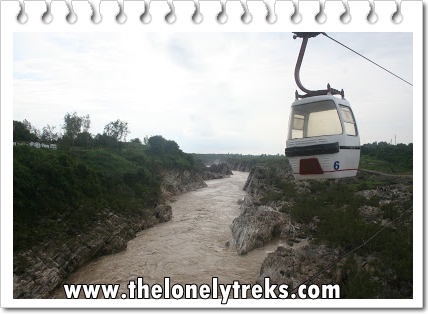 Four of us frends decided to visit Jabalpur city in Madhya Pradesh. We travelled by train enjoying the scenice beauty on the way. I have always loved train journey as it gives ample opportunity to enjoy natural beauty as well as you come across people from different diversity. We spent three days in this wonderful and incredible city and this is what we found.

Places of interest in and around Jabalpur

Jabalpur has been accredited as the most favourable city for tourism in Madhya Pradesh as it is gifted with abundant natural beauty having hills, rivers and waterfalls. It also has number of temples and historical monuyments to attract the tourits. Some of these places are as follows.

Bhedaghat.  Bhedaghat is located 25 kms from Jabalpur city and is a major tourist attraction, on the banks of the river Narmada. It is known for its marble rocks. This place is famous for moview shooting also.

Dhuandhar Falls.  The Dhuandhar Falls in Bhedaghat is a well known sight where one witnesses beautiful scenery and complete tranquility. The beautiful falls is rough yet calm, soft yet loud and undoubtedly breathtaking. The Narmada River after passing the Marble Rocks narrows to become a smoky waterfall thus the name Dhuandhar falls. Boat ride is available from the Panchavti ghat, in which you can see long marble gorge on the river Narmada, except during the monsoon, when the water level reaches dangerous mark.

Chausath Yogini Temple. The Chausath-Yogini temple is situated atop a hill rock and approached by a long flight of steps. Dedicated to Lord Shiva, this 10th century temple has carved stone figures of deities belonging to the Kalchuri period, arranged in a circular order. According to local legends, this ancient temple is connected to the Gond Queen-Mother Durgavatis palace of Singaurgarh in Sangrampur as well as to the Maharaja Madansahis Madan-Mahal bastion through underground passages. These passages offered safety to the visiting royalties in addition to allowing escape route in times of distress. One can see the figures of yogini most of them broken during the Aurangzed period.

Madan Mahal Bastion.  Built by the Gond ruler Maharaja Madansahi in c. 1116 CE atop a rocky hill, the bastion dominates the skyline. The building is supposed to have been a part of his pleasure resort cum watch tower. The building is a plain and simple structure without any ornamentation. It stands now like a watch tower on the summit of a hill poised on two gigantic hills, the upper part of which on one side overhangs the base and commands a magnificent view over the rich valley around. Looking at the structure and location of the building, it appears that it indeed served as a watch tower. At a short distance, an Ashwa-Shala (stable) exists and a Hathi-Khana (elephant cell) existed where the LIC office stands today. Close by is a Baoli (step-well) for constant supply of fresh potable water to the bastion.

How to Reach Jabalpur

How to Reach Jabalpur by Air

Jabalpur has an airport called Dumna Airport which is located about 20 km away from the main city. This airport connects the city with the with rest of the country by air. The flights from Delhi and Mumbai to this city is on regular basis. Tourists and visitors can avail taxi services fromthe airport to go to any part of the city as well as the tourist attractions.

How to Reach Jabalpur by Train

How to Reach Jabalpur by Road