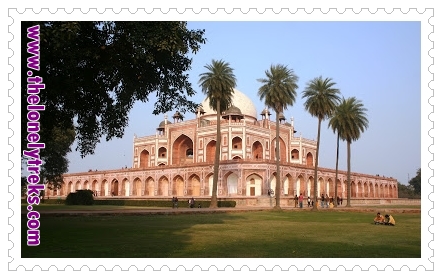 Where is Humayuns Tomb Located

Humayun;s Tomb is located in Nizamuddin East in New Delhi close to the Dina-panah citadel also known as Purana Qila (Old Fort), which was founded Humayn in 1533. The tomb of the Mughal Emperor Humayun was commissioned by Humayuns first wife Bega Begum (Haji Begum) in 1569-70, and designed by Mirak Mirza Ghiyas, a Persian architect chosen by Bega Begum. It was the first garden-tomb on the Indian sub continent.

Humayuns tomb was the first structure to use red sandstone on such a scale. Besides the main tomb enclosure of Humayun, several smaller monuments dot the pathway leading up to it, from the main entrance in the West, including one that even pre-dates the main tomb itself, by twenty years. This is the tomb complex of Isa Khan Niyazi constructed in 1547 CE. Isa Khan Niyazi was an Afghan noble in Sher Shah Suris court of the Suri dynasty, who fought against the Mughals.

The entire Humayuns Tomb complex comprises of many tombs; viz the main tomb of the Emperor Humayun, housing the graves of Bega Begum herself, Hamida Begum, and also Dara Shikoh, great great grandson of Humayun and son of the later Emperor Shah Jahan. There are numerous other tombs of subsequent Mughals including Emperor Jahandar Shah, Farrukhsiyar, Rafi Ul-Darjat, Rafi Ud-Daulat and Alamgir II. The architectural style represented a leap in Mughal architecture, and together with its accomplished Charbagh garden typical of Persian gardens, it set a precedent for subsequent Mughal architecture, never seen before that time in the subcontinent.

Humayun’s Tomb is of particular cultural significance as it was the first garden tomb to be built in the Indian subcontinent. It is said that its unique beauty and style had inspired several major architectural innovations, culminating in the construction of the Taj Mahal which is unparalleled. Unfortunately the decline of the Mughals after Aurangzeb accelerated the decay of the monument and its features, as the expensive upkeep of the garden proved impossible.
Early Attempt at Restoration of Humayun’s Tomb by British
By the early 18th century, the once lush gardens had been turned into vegetable garden by folks who settled here, within the walled area. Then in 1860, the Mughal design of the garden was replanted to a more English garden-style, with circular beds replacing the fours central water pools on the axial pathways and trees profusely planted in flowerbeds. In early 20th century, this fault was corrected when the then Viceroy Lord Curzon ordered the original garden to be restored. A major restoration project was undertaken between 1903 to 1909, which also included lining the plaster channels with sandstone; a 1915 planting scheme, adding emphasis to the central and diagonal axis by lining it with trees.

Damage to Humayn’s Tomb During Partition

During the Partition of India, in August 1947 the Purana Qila together with Humayuns Tomb, became major refugee camps for Muslims migrating to the newly founded Pakistan, and was later managed by the government of India. These camps stayed open for about five years, and caused considerable damage not only to the extensive gardens, but also to the water channels and the principle structures. Eventually, to avoid vandalism, the cenotaphs within the mausoleum were encased in brick. In the coming years, the Archaeological Survey of India (ASI), took on responsibility for the preservation of heritage monuments in India, and gradually the building and its gardens were restored.

An important phase in the restoration of the complex, started around 1993, when the monument was declared a UNESCO World Heritage Site. This brought new interest to its restoration, and a detailed research and excavation process began under the aegis of the Aga Khan Trust and the ASI, culminating in 2003, when much of the complex, and gardens were finally restored, with its historic fountains running once again after several centuries of disuse. The restoration has been a continuous process ever since, with subsequent phases addressing various aspects and monuments of the complex.

How to Reach Humayun’s Tomb

The Humayun’s Tomb is open from 6 am to 6 pm (All Days). The entrance fee for Indian citizens and also foreign visitors of SAARC countries (Bangladesh, Nepal, Bhutan, Sri Lanka, Pakistan, Maldives and Afghanistan) and BIMSTEC Countries (Bangladesh, Nepal, Bhutan, Sri Lanka, Thailand and Myanmar) is only 30 rupees.
For other foreigners the fee is Rs 500 per person.