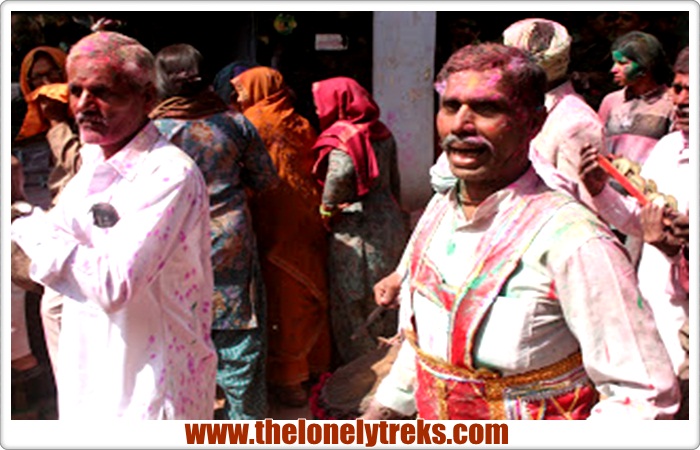 Holi the colourful festival is played throughout the length breadth of the country. However, the most celebrated Holi is played in the Braj region of Barsana, Nandgaon and Vrindavan which is associated with Lord Krishna. The Holi at Barsana, the birthplace of Radha, a village, 42 kms away from Vrindavan, is of particular interest. Legend has it that Lord Krishna visited his beloved Radhas village on this day and playfully teased her and her friends. Taking offence at this, the women of Barsana chased him away. Since then, men from Krishnas village, Nandgaon, come to Barsana to play Holi with the girls of the town. But, instead of colours they are greeted with lath (long bamboo sticks or staff) by the gopies. Hence, the name Lathmaar Holi.

Men come fully padded as they are fully aware what kind of welcome awaits them at Barsana and also the fact that they are not allowed to retaliate on that day. In this mock battle of sorts, they try their best not to be captured. The unlucky ones are, however forcefully led away and get a good thrashing from the women. All in the spirit of Holi.

The Radha Rani Temple of Barsana

Barsana has the distinction of having the only temple dedicated to Radha in India. In the sprawling compound of the Radha Rani temple atop a small hillock in Barsana, thousands gather to witness the holi in full vigour. Bucketful of colours are thrown on the devotees many of whom have come from far and wide. The air is thick with the scent of flowers and perfume. Rose petals and coloured powder rain on the pilgrims as they visit Radha Rani temple. A chopper also flies above on this occasion which throws colour and rose petals on the devotees. In the streets below groups of devotees can be seen singing Holi songs and shout Sri Radhey or Sri Krishna.

The next day, it is the turn of the men from Barsana. They reciprocate by invading Nandgaon and drench the womenfolk of Nandgaon in colours of kesudo, naturally occurring orange-red dye and palash. Today, the women of Nandagon beat the invaders from Barsana. The week long Holi celebrations continue in the various Krishna temples on different days. The celebrations are filled with clouds of colours and of course, much fun. The womenfolk of Barsana start preparations for this beautiful festival of colours a month in advance.

How to Reach Barsana-Nandgaon from Delhi

Nandgaon is a rural area and distance from Delhi is 175 kms approx which can be covered in 3 and half hours. Mathura and Vrindavana areas are the most important places of pilgrimage for devotees of Lord Krishna. Krishna was born in Mathura and spent His childhood in Nandgaon in Vrindavan.

At the Pushkar Camel Fair